With a location of only 90 miles from Havana, the Cuban Independence War of 1868 and the resulting migration of cigar workers to the little island made Key West the cigar capital of the United States. In 1885 there was a major cigar worker’s strike which lasted for months and Vicente Ybor, a principal manufacturer, moved to Tampa. Of course, Tampa offered a variety of ‘good deals’ and individual workers followed. Though Tampa would soon exceed Key West in cigar production, the influence left behind on the small island with its proximity to Cuba resulted in a lasting impact that is still part of the culture that lives on through today. Cigar boxes were used by cigar manufacturers to distinguish themselves apart from their competition. Spanish cedar became the wood of choice for making the boxes to preserve the fine hand rolled Cuban tobacco leaf cigars. Cedar is combative against moisture, naturally resistant to rot, decay and insect attacks, not to mention the distinctive aroma and beautiful wood grain of natural cedar. It should come as no surprise that we found the cigar boxes a perfect match for storing and sharing the spices. So we set out on having a cigar box designed and constructed in the same manner that is still used today for the world’s finest cigars. Each cigar box consists of 100% all natural Spanish cedar. Handmade and sanded right here in the US. Intended to hold and protect all 5 of our signature blends. We hope our Key West Spice Company cigar box gift set makes for the perfect gift and the lucky recipients get to develop their own unique use and purpose for each box long after the spices are gone. Share the Love! 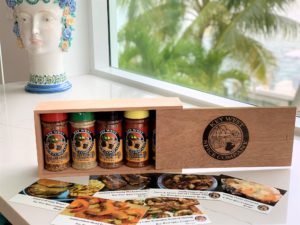 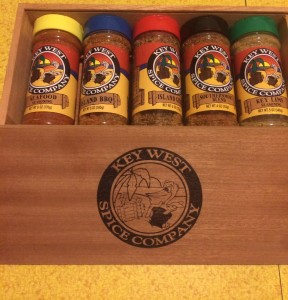