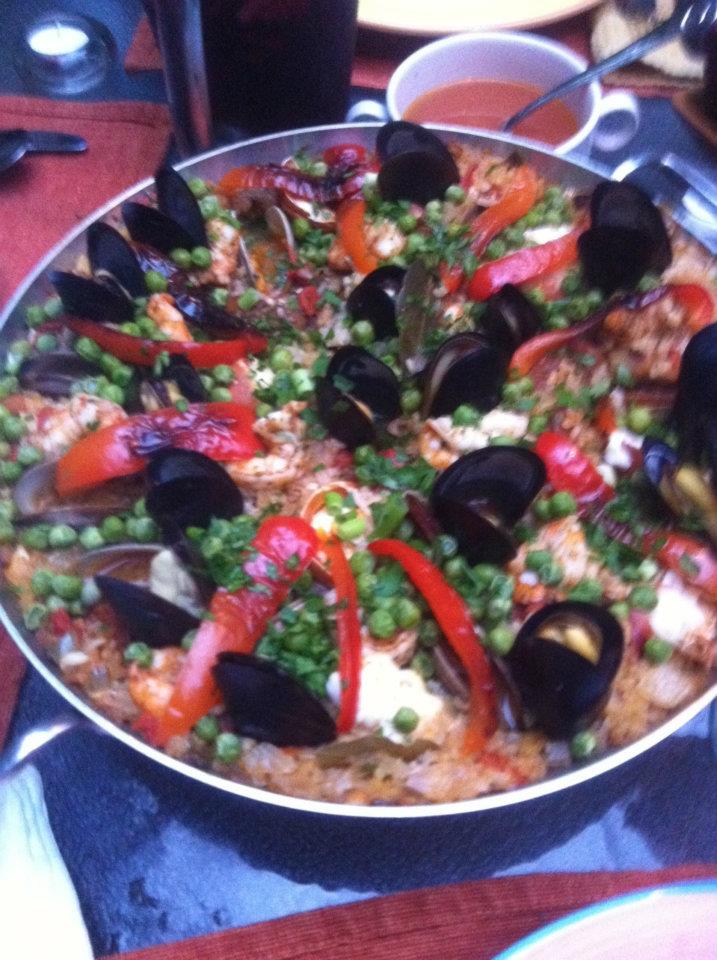 What is Paella?
Not everything can be defined, but here is the simple definition:
pa-el-la /päˈāyə/
noun
a Spanish dish of rice, saffron, chicken, seafood, etc., cooked and served in a large shallow pan.
Paella or the la paella is the name of the cooking pan itself and not the actual dish.
Paella pans come in all kinds of sizes. If you don’t have one a Dutch oven can also do the trick.
Paella was originally a dish of farmers and commoners, basically a rice dish consisting of whatever was on hand, blended & cooked in a shallow pan. It could be as simple as rabbit and snails combined with local vegetables, spices and rice. Today the most commonly served paella consists of seafood paired with meats. Such as shrimp, clams, mussels, lobster with chicken and chorizo.
I say when it comes to Paella, there are no rules, so make it with whatever is in season or on hand.

Paella can be cooked inside or outdoors. Though I love cooking it on the grill, making it indoors gives you more control. I find it easiest to begin on the stove top and finish in the oven.
So when asked, what is Paella? Here is my answer in a recipe.
Paella Recipe:
Serves 4 to 6

If making your own stock, begin that now using the shrimp shells in 2 quart sauce pan, once ready set aside
Season the peeled shrimp and the cut up chicken in separate bowls with a tablespoon each of Key West Spice Company© Southernmost Blend
Place Paella pan over medium heat add 2 tablespoons olive oil once hot add sliced red pepper strips stir until skin begins to blister, 3 to 4 minutes, transfer pepper strips to small bowl and set aside
Lightly brown the chorizo until fat begins to render, remove from pan with slotted spoon and place on paper towels to absorb excess oil then transfer to a bowl to set aside
Using same pan add a tablespoon of olive oil, brown seasoned chicken pieces, 3 to 4 minutes then transfer to bowl with chorizo
Add enough oil to pan to have about 2 tablespoons.
Over medium heat add onion, stirring until beginning to soften then add garlic and cook for another minute. Add a tablespoon of Key West Spice Company©Southernmost Blend and stir.
Stir in drained tomatoes, cook for about 3 minutes
Stir in rice and cook until well coated
Stir in wine then add saffron after a couple of minutes begin adding broth 1 cup at a time, about 3 to 5 minutes between cups, stirring in between cups
Return chicken and chorizo to pan bringing to a simmer give it a stir
Add clams and mussels hinged side down
Push lobster pieces into rice, sprinkle shrimp and red pepper strips on top add sweet peas and place in 350° oven until clams have opened, about 10 minutes.
Remove from oven sprinkle parsley on top and enjoy!