What is a teres major?
A small muscle located in the shoulder area.

Also known as the shoulder tender or petite tender. The teres major is as tender and sometimes more flavorful than it’s more expensive and commonly known counterpart, the beef tenderloin. One reason you might not see it in the meat department is the skill required to extract the cut from the blade shoulder, and every cow only comes with two. They are relatively small in size, usually 8-10 ounces fully trimmed, about the size of a pork tenderloin.

They are a fraction of the price of the more commonly found tenderloin or filet of beef, typically only $8-$12 a pound.

Once trimmed and ready to go, they are as easy to prepare as they are delicious to eat. Because of their size they cook quickly without much effort or guess work.

You can grill or pan sear them whole, cut into medallions or as a small filet.
Try them seasoned with Key West Spice Company© Island Grill, then pan sear them to a medium rare, let them rest off the grill before slicing them up.
Cooked whole they’re just the right size for baby beef wellingtons.

If you do not see them where you shop, ask your meat cutter if they can get them for you.

Directions:
Remove teres major from refrigerator to unchill and season with Key West Spice Company© Island Grill
Place cast iron skillet on high heat and drizzle a little oil in it.
When almost smoking add seasoned teres major to your hot pan. Give it at least a couple of minutes before touching. There should be a slight crust firming.
After searing well on one side, turn it to sear the other side.
The meat should feel somewhat springy when pushed down with your finger. If using a meat thermometer, you’re looking for 125-130° Fahrenheit.  120° if making baby beef wellingtons.
Pull meat off the heat and let rest at least 10 minutes before slicing. I like to serve sliced with a sour cream horseradish sauce.
They can also be refrigerated whole and saved for later.
Leftovers work for just about anything. 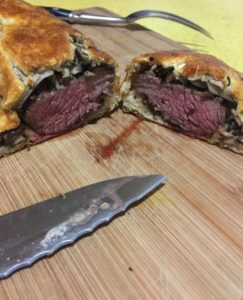 One thought on “Teres Major”